First Baptist Church of Ahoskie began in the latter part of 1804. Throughout its more than 200-year history the church has been and continues to be an integral part of the fabric that is Ahoskie. Now in its fifth physical facility, First Baptist is led by its 25th pastor,  Rev. Dr. Paul R. Gilliam III (Trey), and associate pastor, Rev. Anita D. Thompson.  Rev. Dr. Jesse J. Croom serves as Pastor Emeritus.

Since its beginning with sixty-seven charter members, First Baptist has grown in size and membership. Throughout it all, the heart and soul of the church continues to reside in worship, fellowship, and service to our community.

Sunday School began in 1844 with ninety students and 13 teachers to lead in Bible Study; Woman’s Missionary Society was organized in 1899 with seven charter members and has grown in membership and service ever since. The Church has been involved with local, state, national, and international missions since 1853.

This emphasis on Missions continues today through a robust Missions Education program for all ages, beginning with preschoolers. First Baptist members, both youth and adults, have served as mission volunteers in Antigua, England, Jamaica, the Czech Republic, Montreal, Chicago, New York City, West Virginia, Washington DC, New Jersey and Vermont, and many other places across the globe. 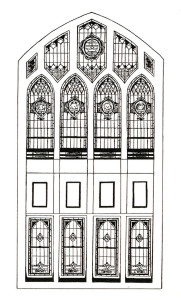 Another important aspect of First Baptist Church is its storied Music Ministry. Beginning with graded choirs in 1948, the Music Ministry has grown continuously. First Baptist has been blessed with the leadership of well-trained musicians who have led the church in choral and instrumental music education, involving children, youth, and adults in several choirs including handbells.

To date, First Baptist Church has had the privilege of ordaining six of its members (two of them women) to the Gospel Ministry. In 1920, First Baptist Church ordained its first two women to the diaconate and since that time, both women and men have served alongside one another as deacons and in numerous leadership positions within the church.

In 1993, after a lengthy study of denominational relations, the membership voted to sever relations with the Southern Baptist Convention and unite with the Cooperative Baptist Fellowship, the first church in North Carolina to do so (hundreds have done so since). First Baptist Church continues support of the Cooperative Baptist Fellowship and CBF-NC.

Please join us as together we write the next chapter of the history of First Baptist Church!

Our worship (Sundays at 11am) is shaped by the liturgical calendar year and is traditional in nature. We enjoy creative and integrated worship experiences through the use of hymns, responsive readings and prayers, scripture readings from the Revised Common Lectionary, musical meditations by our various choirs and instrumentalists, testimonies of faith, and preaching from God's word.